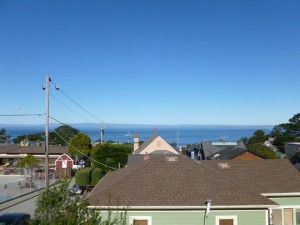 This has been our ‘weather’ for the past six weeks. Horrible.

Wildman and I ride out to Watsonville and Jackel: Alder $2-4/bf, red oak 4-5/bf, cherry same, acacia 10/bf.  This foray a speculation on my part.  I wanted to have some ballpark figures on a range of woods should the Factors at the Naval Postgraduate School commit to having me build them a display case for their 9 11 artifact.

Shop: lame out from flooring frame for Psychopractor, glue up.

Prof in for philosophy session.

A Test. A test of my framework. The Prof wants to expand the stoop in front of what was once the main entrance to the house. To do so, he wants a sub-footer on which he will lay block and into the space contained by the blocks pour a foundation for the top layer of whatever it is that he’s putting on top.

Today’s effort was to lay half of the sub-footer, the southern half. 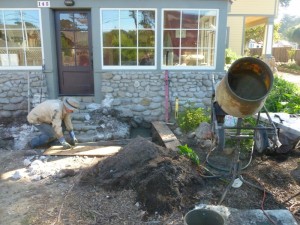 I’d never used Sakrete before, so I learned something. A 60 pound sack of Sak does about 0.45 cubic feet. The sub-footer looked to be about 16 cubic feet. Close, we used 28 sacks.

Everything worked out smoothly, even my knee, spine, wrist, neck, trombone. There was only one quirk: The Prof has a Ronco Folding Pocket cement mixer, but instead of positioning the mixer to pour directly into the footer, he insisted that we empty the mix into buckets which we then horsed the five feet to the footer.

His rational: the mixer will cause the walls of the footer to collapse. I think with the proper precautions, this could be prevented and the extra work eliminated, but I wasn’t today’s job foreman, he was.

Surviving this, it was to The Shop to unclamp the Psycopractor Frame, rout for the inserts, cut the glass and backing, and then trim the frame to size and then kerf the front for decorative purposes.

One coat of Wildman’s Special Elixir followed. More to come.

Progress on dual projects: the Psycopractor Frame and the Giordano Trophy.

The Psycopractor Frame (style Xerxes) wanted, needed and got a second coat of Wildman’s Special Elixir, with especial care taken to gently brush the Elixir into the six kerfs, which will undoubtedly win me the Good Housekeeping Seal of Approval.

Giordano Trophy – The Prof wants to award a colleague, on his immanent retirement, a suitable memento commemorating both the man’s life-long service, and the good will felt toward him by his peers. After many opium pipes, we arrived at a design: a simple plinth with the Greek letter pi soaring into the aether, and on the letter pi the emblem of an old-school mathematician (which General Giordano is), a slide rule. The base is to be inscribed with a tribute.

This day, my efforts were to build the letter pi.

I figured for dowel joinery, legs at a 15 degree rake. 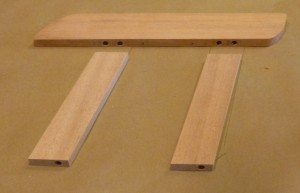 This figuring was sound, until I arrived at the dry fit when I found that I had drilled the holes for the dowels in the underside of the cross-slash 180 degrees out of phase – pointed toward San Antonio instead of Anchorage.

20 minutes of re-work ensued. No cursing.

Letter glue-up was safe when taken as directed, which in this case involved making four 15  degree wedges to allow the clamps to span and grip in parallel. Mostly I’ve found that dowel joints seldom require clamping, but I did so anyway. Ungawa.

Knee too geechy for the scheduled PT. Instead limped over to Winner’s where I hope to have the Giordano Trophy base etched. Leaving explicit instructions, I can only hope that by Friday, I will have what I hope for. Can do little on the trophy until this is complete.

Stopped in at the Scholtze Center. It’s day care for the elderly, a demographic I feel myself too rapidly approaching. One of the items on the monthly calendar caught my attention: Wednesday 10 – 2 Sewing.  Is this Master’s Class or can a bloke without any prerequisites attend?

Cloth? No. Wood? Yes. Put the third coat of Wildman’s Special Elixir to the Psychopractor Frame, likely it will be enough and can wrap the job this day.

Pi out of the clamps and first coat of WSE. Can do little else until the base is etched, but sniffed out some possible feet, pending approval from the client. 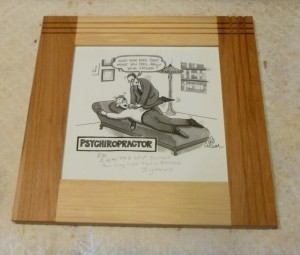 And fortunately, here he is.

Takes delivery of the psychopractor frame, agrees on my choice for the feet for the Giordano Trophy and hands me cash money for both jobs. Who has it better than me?

1 22 – There it sits. Empty. Yearning to fulfill its role in the grand drama of the Universe known only to the Gods. The Tall Oak Display Case.

I’d like to put my fossil skull of a juvenile Ichthyosaurus in it, but I don’t have one. What I DO have are a dozen home-maker hints and cookbooks ranging from the 1930’s to the 1970’s. 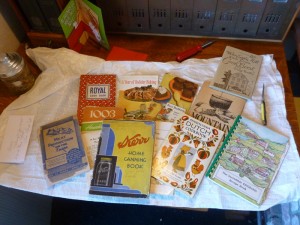 That Kerr Canning Handbook dates from the 1932-33 World’s Fair.

They larger run about 25 cm tall, the shorter run shorter; inside the case there is insufficient vertical room to plant them in a first floor and second floor array. But not if the two rows are overlapped.

And so the idea was a sort of two-tier bleachers: the shorter seats atop and set back a bit, the larger customers on the floor. Angled. Somehow.

The First How: rip out some ¼” ply for the backs upon which the books will recline. And then rabbet mahogany which will support the books once glued to the ply. 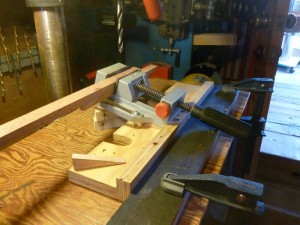 The Second How: How to drill the 5/16th diameter, 15 degree off vertical for the support dowels. Not by tilting the drill press table because the hole angle is perpendicular to the long axis of the mahogany.

Rigged up a travesty of justice that did the job.

The Third How: how to down-size the ends of the ½” dowels to fit and seat into the 5/16th’s inch holes. Easy. Sneak up on the table saw blade height and then perpendicularly to the fence in and out spin your partner against the fence.

Glued up the two bleachers and had to get off the afflicted knee.

This morning’s consultation with the orthopedic surgeon lasted about 5 minutes. He glanced over the MRI and vowed to petition the Worker’s Comp entity to agree to an arthroscopy.

Back at the Slack, less uncontrol, still just as much unknown.

How to proceed with the Bleachers? Item 1 – the thing cannot be more than about 32 cm tall or it will not fit into the Tall Oak Display Case, so maybe Step 1 is to drill for the connecting dowels on the front rack, and then drill for the corresponding holes in the back rack so that the overall height meets requirements. 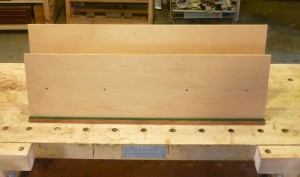 This done, cut the legs to about 9.4 cm and dry fit. It looks …… ugly, but when it’s in the case covered with interesting cookbooks it will scarcely be seen.

That’s not the point, of course. I look upon this exercise as a chance to hone the techniques necessary for museum-quality display.

The legs, at the shoulder of the dowel insertion ought to be angled 15 degrees. This I did not do.

The bottom of the outside pair of legs ought to fit into a floor brace, or feet. There is not going to be a floor brace.

Mr. Christman gives me a B- on Design, and a L+ on Following Through On Important Details.

Our filthy, incessant, monotonous clear skies and high temps continue, Poseidon! Why have you deserted us?

16 points for glimpsing either a Lockheed Electra (think Earhart) or Lodestar on final. Either rare.

0.0023 points for trying elevate my grade up from an L+ to J -. I wrote yesterslack that I wasn’t going to put feet on the outside legs of the Bleachers, But I Just Couldn’t Not Do It. Odin Be Praised! 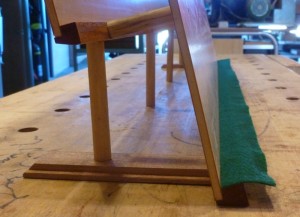 Backstage with the cookbook rack – showing the feet and the method of joining the front to the rear rack – the felt on the front rack has yet to be trimmed.

Just a pair of modest feet, counter bored for the down ends of the outside dowel legs, and angled at 15 degrees inboard to match (almost) the rake angle of the racks.

Pranged the nailing – at the last minute, increased the pre-drill angle of the nail holes to 30 degrees. This had the effect, in the end, of having the nails sheeve out through the bookrests at the base of the racks. Curses.

Cut them off, ground them down, but they were still obvious.

Actually, no. It’s hotter today that it typically is during the summer, as if there has been any typical for the past five years…

There are only a few details to see to on the Cookbook Rack for the Tall Oak Display Case – trim the felt on the runner on the front rack and then put a coat of Wildman’s Especial Elixir on the feet.

This done, the case and rack are ready for their graduation photos. 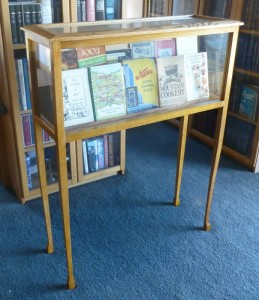 And I’m ready to jump into the 55 degree bay just to cool down.

And here is how the Giordano Trophy came out: 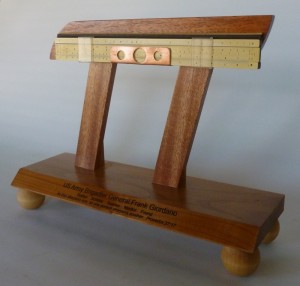 Cutting a rakish figure from a half-profile, the trophy will remind the honored recipient both of his noble past and the good-will of his friends.