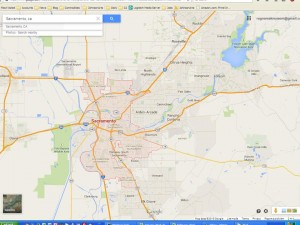 The job interview was at 0900, 200 miles away in Sacramento. Rise and drive at 0400 to allow plenty of time for unplanned delays? Or motor over there the preceding day?

Which would you choose.

It wasn’t so much the getting up for the opening of fishing season, it was that I knew I’d wake at 1237 and lie there awake for three hours.

And so in spite of the economic impact of sporting for the night’s camp site, drive the day before it was.

There are three routes, I chose to lope north and east, over the Pacheco Pass and hook north on I-5. A fine route except for the constant conga line of semi’s on the two-lane 156 between San Juan Bautista and the four-lane 152 west of Hollister.

The day was cloudless, traffic was light on the 5 and Stockton was cleared with a minimal amount of dread and cursing.

I opted to drop the 5 and cut east on the Florin Road, which I expected to be farm fields and ranches. It was. 50 years ago. It’s now a Sacto ex-urb heavy with liquor stores, muffler repair shops and mini-malls indistinguishable from those of Twin Falls, Minneapolis, or Kansas City.

Three hours high-speed driving (the limit on most of I-5 is 70 mph) gets me from door to door.

One moment of serendipity, as I trudged along northbound on the Power Inn Road, there’s a small sign at an intersection: Brewery & Tap Room.

Bookmarking this, I turned east on the Folsom Road intending to sniff out the Timberlake facility, the site of the morrow’s interview.

The Folsom Road is the western end of the original trail between Sutter’s Fort and Carson City, Nevada. This was later modernized into Route 50, which is now a freeway. Here in the eastern extent of Sacto, or to be more accurate, the independent municipalities along the American River, it is flanked on the south by the main line of the Southern Pacific and the interurban rail. The north side is a numbingly repetitious recapitulation of liquor stores, muffler repair shops, nail and hair salons, and mini-malls.

I target lock the Timberlake facility.

Job One: the night’s campsite. Nearby is a Holiday Inn Express. They want $120 for a sleep.

Onward to the mom & pop motels I’d eyed on Folsom. 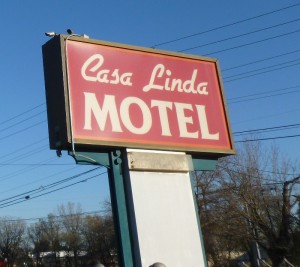 Here’s a Wal-Mart and so I could camp in the parking lot if necessary – I’d brought my sleeping sack and bedroll.

Here’s Vince’s Motel and La Casa Linda. There’s an older Asian woman pushing the maid’s cart and it is with her I do business.

In my numerous cross-country road trips, I’ve become fluent in the expectations on should foster concerning the lower end of the stop-and-flop market. 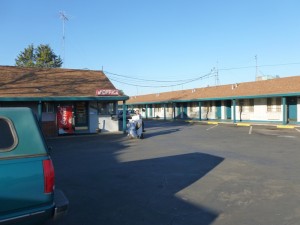 Shredded carpet, curtains pierced with holes, exposed wiring, chipped countertops, drawers falling out of the bureau, the stench of 60 years of cigarettes infusing the concrete block walls. The shower a commercial jet bathroom sized space was a step up (and down once you are in, the dicey bit) 12” above the floor.

But the price was affordable, and the bed was firm. And it had indoor plumbing, most of it hidden.

With lodgings secure (the Wal-Mart parking lot would have been a constant clamor, as it’s just across Folsom from the railroad tracks on which there was a freight or commuter train every 15 minutes, and nearly insufferable glaring lights) I could now turn to the evening’s amusement.

A wrong turn (which is a misnomer, when on an adventure, there are no wrong turns, unless its off the lip of the North Wall of the Grand Canyon…) took me too far east in my quest for the Brewery. But this excursion was not without value.

The Device Brewery and Tab Room was sited in the back of an obscure industrial park and regrettably not open on Tuesday, today. 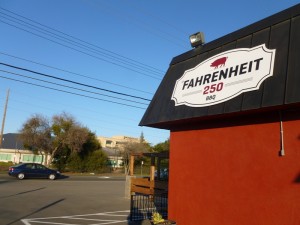 Yet the errant turn had turned me onto Fahrenheit 250, a grill joint that I never would have found except for the right wrong turn.

Auburn Alehouse Pils – I was so parched it was like pouring water on dry sand, could barely taste it.

Jack Rabbit Brewing English Pub Ale – Served too cold but otherwise a fine (even if pasteurized) representative of its cask-conditioned genre.

Deschutes Obsidian Brown – YOW! Big, full, majestic and complicated, too complicated for a boy a long way from Brockway.

Berryessa Double IPA – Supposedly, according to Tony, the barman, the crème de la crème of hoppy ales on tap here. I found it acrid, dirty, sour and disappointing. 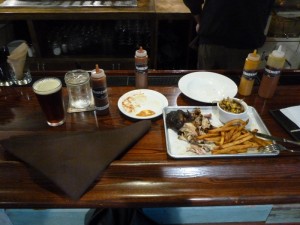 The $15 half a tiny chicken more like a grouse (with hard-cooked fries and sautéed mushrooms) was NOT disappointing.

Wasn’t the best BBQ I’ve ever had, but Sacto is a long way from Memphis, or Houston.

The night at La Casa Linda was a long way from restful, in spite of the comfortable bed. Jitters, I reckon. 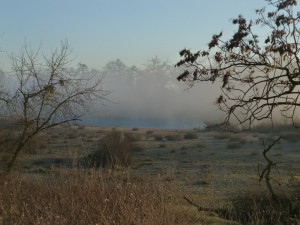 With the dawn comes ShowTime.

Took in some coffee and then over to the American River to watch the frosty mist curl like spirits over the river bottom.

The entire stretch of river between its juncture with the Sacramento just north of the original waterfront and the foothills back of Folsom was gang raped during the gold rush by hydraulic mining and dredging. Spoil heaps like WWI battlefields line the now tranquil watercourse.

In the morning quiet next the river I verbally practice my interview spiel; and then step on stage.

Arrive early, as is my bent, at Timberlake.

I’m meeting with the Ops Manager, for whom I would be directly working, should I win the contest. I like Simon Yule the moment I saw him, and my liking only increased during the hour in his office.

There are two slots and 10 candidates. Good odds. Odds made better by my anticipating Simon’s questions and having articulate, concise, self-aggrandizing replies.

Next: There are two be two more interviews, a semi-final and final, should I clear this gate. I’m optimistic.

And it was so. 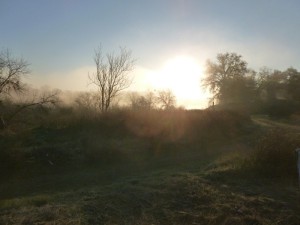 4 Responses to “Sacto and Back”