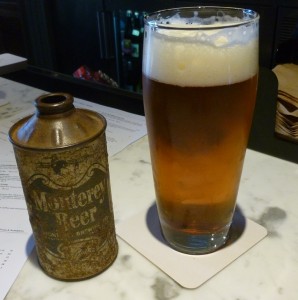 After a provisioning run: cut the 30’s on the six Hoopla Troupe panes.

Form and install the tray runners inside both Prize Cases.

2 25 – Decided upon more cedar for the two trays for the two Prize Cases. Thicker than what I want, but ran with it anyway. Took the stuff down to about 9/16ths at 10.5 cm wide.

Cedar cuts well, but like all woods I’ve tried, wants to fracture and split on the margins. 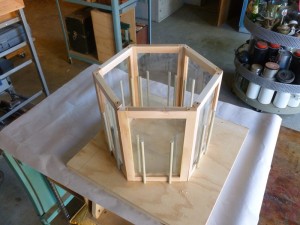 Panes shown in the holding jig which will allow your artisan to remove them one by one for painting.

Built a Dowelhenge to hold the six panes of the Hoopla Troupe whilst working on it, may build a back door….

2 26 –  15% day, accomplished about that much of what I think I thought I wanted to get done … now that I am semi-sure I know all the known unknowns about what needs doing on The Prize Cases and the Hoopla Frame.

What Was Done: more cedar for the Prize Case Trays. Thicker than I’d want, but F it.

Blind rout for the kerf into which the center divider will nest. 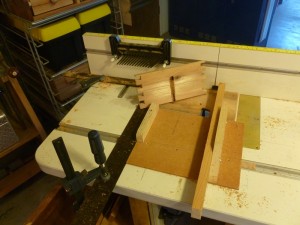 Sliding dingus holds the Prize Case sides and the stop on the left of the router table provides the … well, the stop.

An hour in the making, 3 minutes in the doing.

Glue up on Grits, or is it PG Cav is Good. Maybe.

Can a door be fashioned from the extant extras for the Hoopla Troupe.

Commission – William Ducci of somewhere SC wants a slimmed-down version of the Travel Bar. Today we chat. He’s going for the walnut brass trim model (?) which I will make starting with his check for half on arrival.

Both Prize Cases come with an internal top tray, one of them shown here in glue-up.

Finessed the Prize Case Inner Tray for Cav, attached finger grips to the center divider for the PC tray for Grits.

Beveled the edges of both the bottom and tops for both cases.

Painted “CAVALRY” and “GRITS” on the cases.

Tested gouging out – jury still out.

De-googed the monkey exudate from the six Hoopla Troupe panes.

Maybe NOT building a separate door but simple hinging an extant pane.

3 1 – Prize Cases: Sand and fill on the tray for GRITS, and then pre-drilled for the rivets that will hold the continuous hinges, both boxes.

Pocket holed the inner upside of the lids by which the tops will be affixed.

Cut and laboriously polished 3 cm wide copper, then drilled for nails, did not attach.

Notes for March 7th Docent Training – I’m one of the two more experienced tour leaders.  We’re bring up a new crop of docents and in addition to the excellent presentation to be given by Mr. Michael Green this Saturday, I will have some thoughts on How To Interpret.

You have two and only two obligations: 1. be accurate & 2. be entertaining.

No one but you knows what you intended to say

If you get lost, stop. Pause, and then ask if there are any questions – this will give you a few moments to recover your train of thought

Keep your hands and your body still, unless for emphasis, and this infrequently

Never, ever read from a book – if a passage is so important to impart: memorize it

Use dates sparingly, and always link them to an event most in the crowd will have heard of

Cutting the glass in a hexagon was straight-forward, but cracked the first attempt.

Glue up is good. 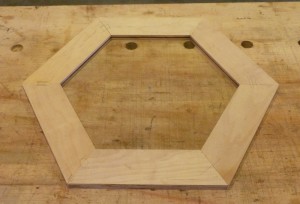 Here is the hexagonal top piece that will sit atop the six panes.

Slob Two: Fine tune GRITS so as to affix the top to the lid, and the bottom to the base.

In spite of double checking the screw penetration via the pocket-holes, more than half of the 14 poked their pointy little snouts out the very top, and visible surface of the lid. FAK.

Backed them out, installed tiny washers, and then drove them back in thinking clean thoughts about wood putty.

Bottom affixed to base.

Less wretched looking but in the end wretched is Supersmythe’s hacking on my Linux box. At issue:

3 4 -After the Drive Through Doctor’s appointment where yet again I was told by the eminently believable Dr. Prysci that he would get the wheels spinning in my direction re: Dr. Meckel, it was home and to The Shop.

Repeated yesterslack’s exercise of fitting lid to top, and bottom to base of the Cavalry Prize Case.

The Base. Since this product is going to The Professor and he has a decidedly different set of aesthetics than I, I did something that I wouldn’t have otherwise. I had on hand a dozen or so wooden curtain rod finials: knobby, turned spindles which, once their lag screws had been pulled, made ugly but striking legs for his case.

Blind riveted the continuous hinge to the bottom and top.

Now, the real challenge: bend the copper strip tight enough to show no gaps but loose enough to allow for lid open/close. The nail holes had already been drilled. It was a matter of eyeing up the corners and then turning to the Mighty PEXTO brake to make the 90 degree angles. There’s one more wrinkle – the copper strip will overhang the lid by 0.5 cm, but in wrapping the strip around the back of the lid to kiss the continuous hinge, there can be no overlap otherwise the lid will not open. To make this trim required a bit more legerdemain (and more fine, and precise metal cutting shears) than I’m capable of. 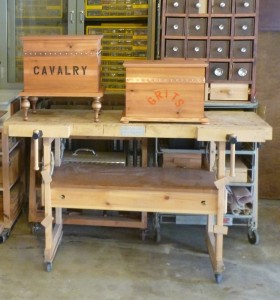 Cavalry and Grits now await their top coat of urethane.

But I pulled it off. Not perfect, but striking, and this time, attractive. You be the judge.

COMMISSIONDAY –   The check WAS in the mail.

I’d been talking with a semi-retired skeet shooter out of South Carolina (winter) and Hartford (summer). He wants a slimmed down version of the Travel Bar. Specifically, sized to elegantly lade three 750 ml bottles of god’s own grape juice. In walnut.

Wine bottles, at least at Trader Joe’s and here (a subset) vary in girth from 3 to about 3 1/2 inches. I allowed for this in the design. What I DIDN’T allow for was excursions in bottle height.

Sized out the walnut backer board at 1 7/8” for the door of the case and 4 3/8” for the case. English units – GAWD – had to work in them for a change because the planned box joints would be 3/8”. Planed all down to about 1.2 cm (Metric System: the choice of science and saavy cabinet makers since 1793).

Box joint cutting was the next task. A task made straight forward (note: I did not write EASY) by my Rockler box joint jig, although I could have used my home-brew jig, but I needed to get out of the relentless sun pounding the back deck.

Dry fit is GOOD both on case and door.

Dry fit is BAD in terms of sizing. It turns out that wine bottles vary in height, I’ve a Bogle that runs to 13” in stead of 12” FERK.

Life here is not about being perfect, rather, it is more wrapped around ameliorating mis-steps.

I email the client asking if he has a standard brand and if so, measure the bottle and advise. In this, I am hoping he wants only 12” tall bottles for his custom made case.

If not, and his beverage interests span the oenosphere, I shall have to procure more walnut and start over.

But all is not FUBAR. Can still complete the extant case and sell it to someone who never buys wine in bottles taller than 12” AND it’s a good tune-up should I have to re-work the entire gig. The only remaining challenge will be the blind kerfs for the two partitions, so this too will be excellent practice.

Some members are remembered by other members.

LABDAY2 – The core of today’s ‘training’ for the new crop of docents for PBL was a two-week interpretation course taught by Mr. Michael Green, Interpreter Extraordinaire rendered down into 1 hour.

The man knows of where he speaks, years at San Simeon, years teaching presenting. And there is a difference between presenting and interpreting. Go to any trade show and you will behold actors and actresses who are experts at presenting. But interpreting historical properties is vastly more challenging than shilling set top boxes or band saws; its about telling stories, calling forth the past, making that past relevant to today’s audiences. 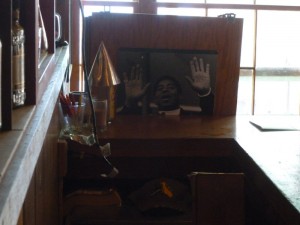 And here at the PBL, we have an embarrassment of riches.

Ed Ricketts was one of the first ecologists, was an ecologist even before the word existed. So there’s relevancy to today’s hysteria on global warming. Ed was the chief influence on John Steinbeck an how he wrote. So there’s relevance to literature. Ed was a philosopher deeply interested in the questions of who and why we are and what should we do about it. So there’s a mixed bag of sociology and psychology which will never be out of fashion. Ed was a profoundly sexual man and profoundly attractive to women. So there’s relevance to anyone with still-active glands. John Steinbeck once wrote about Ed, “His mind knew no limits.” So there’s the untrammable human spirit of inquiry. And there is Ed the scientist, making sense out of his collecting and interpolating how his inter-tidal shores were related to other, larger issues. So there’s global inter-connectivity.

None of that even addresses the post-Ricketts period where The Lab was owned and used by the PBL Club, maker’s and shakers who created the still-ongoing Monterey Jazz Festival.

So interpretation is about making one or more of these topics over into a single theme, and then causing the theme to stand up and sing …. and everybody on the tour with it.

The place is magic, and every one of our budding crop of docents knows it, feels it and yearns to make good. We’ll be testing two of them out next week.

As if that wasn’t enough fun for the day, I opened The Shop and put a modified light chestnut stain to the two Prize Cases.

And then the Hash House Harriers descended.

Sub-commandant Mullins had previously planted a cooler of cheap beer and I thought what would happen was that there would be sporadic, brief visitation in ones of twos who would down a swing and dash off.

En masse 30 men and women (many cute girlies …. but since I see so few girlies they all looked cute and maybe weren’t….) arrived in toga’s and spent 30 minutes wandering about the place. Nothing stolen, so far as I could tell, and they didn’t have any pockets. I was introduced to the HHH concepts of Dick Check, Tit’s Check, and Ass Check, which at stipulated locations, laggards must exhibit.

All Steinbeck approved and only lacking the fact that he didn’t make it up. 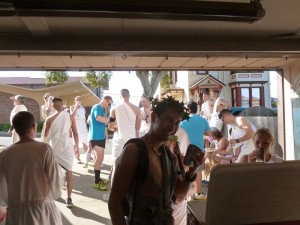