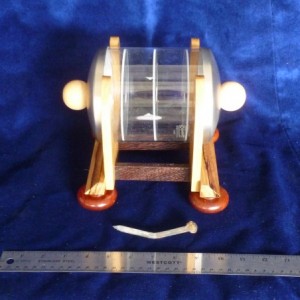 The Western Flyer was and is a wooden purse seiner built in 1937 and was the boat chartered by Ed Ricketts and John Steinbeck for their epic collecting (and drinking) trip to the Sea of Cortez. The trip is recounted in the only book Steinbeck co-authored (with Ricketts): The Log From The Sea Of Cortez.

The Western Flyer was nearly lost, sunk twice in mooring, but has been bought by the Gregg Brothers and is now in a boatyard in Port Townsend, Washington being restored.

John Gregg materialized at a recent Cannery Row Foundation tour of the Ricketts Lab and proffered some nails from the boat restoration.

I have come into possession of one of them – clearly it wanted a display case – but a departure from the blocky cases I’ve built.

I settled on a vintage Coleman lantern globe.

All that was left was to form superstructure around it, and craft some means by which the nail could be displayed within the case, and yet removable.

I supported the globe with oak into which I glued rare earth magnets. These magnets retain the end covers (cosmetic appurtenances for suspended ceiling lights), but allow the covers to be removed.

For the internal support of the nail, I formed acrylic discs with holes to support the nail.