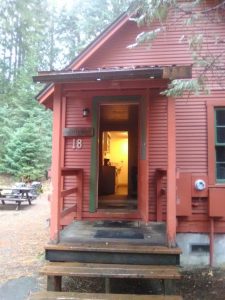 Warm snug and dry all the rainy night in the Hamaker Cabin.

Rain all the darkness, the drip drip drip from the eaves onto the lava an ease not easy by which to come, the goodness of rain when only it is good because you are dry and warm.

What’s the move? North, not yet east. I’m too far south to trend that way, the way that leads through southeastern Oregon Territory, ground I never need see again.  2003 passed through on 20 from Boise, stayed the night in Burns.  The country is god’s litter box never raked over, but baked over.

In high water, the Rogue flows both over and under this ‘natural bridge.’

But before we trend north, let us examine “The Natural Bridge.”  I am expecting something like the arches out of Moab, Utah.

Down the lava tube goes the Rogue.

The natural bridge is where the Rogue River plunges through a lava tube. The downspout felt creapy and looked scary – you wonder how many careless anthropoids made their last mistake here.

North means 62 to its junction with 280 around the west side of Mount Mazama. Altitude here, possibility of snow. Erk.

Mount Mazama: 8000 years ago it blew up, sending a mile of rock into the sky, collapsing in on itself forming the caldera now a lake. There were people here, some of them, far enough away, survived to tell the tale. All of the volcanoes along this rim of subduction of the Juan de Fuca Plate under the American plate are extremely young, geologically speaking, their origins only 37 millions years ago, but most of them are less than 2 million years old. 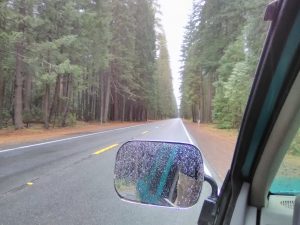 Here is what driving looks like on the shoulder of Mount Mazama – before you find the snow.

2 million years ago our bi-pedal ancestors, Homo Habilis, were gamely loping about the African veldt, making tools, and living the good life, until they were eaten, or starved, or killed by another band of enterprising hominids. They had about half the cranial capacity of those of us today who do not support Trump.

I was dim-witted enough to surmount the 6000 plus altitude headed for the right turn and down. Snow almost like it meant to be, but none on the road and temps above freezing, so no black ice… that I felt.

Finally, out of the snow. Highway a straight run you can see 10 miles. I pull off for breakfast, slices from Mazzatti’s. Oregon Trooper u-turns comes up behind me. Asks “Are you all right?”

Give him the A-OK. Thank him for asking. He motors off. Good thing I looked like a white man.

Down and down to the dry land and the intersection with north-south 97. Could have found its southern end at Weed California, but found it here instead. On it, if one has the gas cash, the traveler can traipse all the way to the Canadian Border, and beyond, likely. I didn’t go that far.

Far enough to the Chevron of the whistle stop, Chemult. Major railroad line parallels this route. The friendly gas attendant who wasn’t in time enough to stop me from humping my own fuel remarked upon the burn pile across the road. “I got home last night and my husband had lit fire to my pile! I was saving it up, why was he burning it now! “Why honey, I didn’t know it was Your pile.” I offered that you shouldn’t burn up leaves and such without wrapping some potatoes in foil and baking them in the burn. She liked me for that.

I disliked her for not knowing the origins of the village name. “Chemult, Indian origin?” “I don’t know …. probably.” What IS that? You live in a place and don’t know the simplest fact about it. Strange.

Onward. The country, such as I could see from the cockpit, was harem-scarum not much good for farming now or 150 years ago when the whites ‘discovered’ the Territory. Too dry maybe, the trees scrabby and underdone, no verdure, but maybe it’s handsomer in Spring. But who isn’t?

Ain’t no farms. No ranches I can see, but high country, dry country and a vista all the way to the moon north seems like. Like standing on Gulliver’s forehead and seeing all the way to his shoe buckles. Ridges overclouded to the east, were it some other place I knew of those stray gray lowerings toward would mean snow, but I’m descending.

You go so you’ll know.

Newberry National Volcanic Monument is … What? Closed For The Season. Too bad. Cinder cone plain enough, must be recent. Was. Less than 2000 years ago formed. The obsidian flow out of Newberry Crater earlier than that, 1300 years ago – just about the time the Northmen sweep out of the Baltic to ravage Britain.

This Southman swept north on 97 and got off on Business 97 to scope the town of Bend. Cased the central business district, was hopeful in seeing a train station, but no go. The traffic and the traffic signals a jar to a guy from the back roads, arm on the open window, seatbelt off.

Back On 97, only 32 miles to Madras, my planned overnight at the Elk’s Lodge. Country better watered, ranch and farm land flanking the Deschutes River, the headwaters of which were/are about 20 miles southwest of Bend. 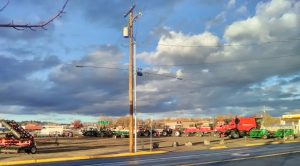 Madras (so named, I was told, for a rug one of the founders carried) is a farm town, plenty of room to pile up the winter snows, few fences in the village.

The Chamber of Commerce directed me to the Lodge, the placard outside the door reads: “Closed Sunday and Monday.” Nuts. This is Monday. 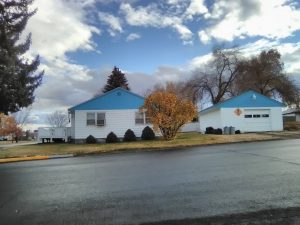 But wait, there are a couple of trucks in the parking lot.

I ring the bell. Rick, the Lodge Esquire says, “Oh, we forgot the change the sign.” The Bar IS OPEN! Brad the Fisherman in charge, and takes the $5 for the night’s parking. A fountain of info and of kindness, running the drinks as a volunteer. 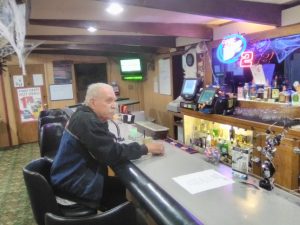 In comes Fish, polio at age 2, captain of his motorized mount. The kind of rough on the outside, acerbic, big-hearted, affable countryman we’d all should have had as our favorite uncle.

Rio Restaurant is suggested for supper. So I made it so. First Mexican’s I’d seen. Oregon is very, very white. Good thing I look like one. I ordered the Enchilada’s Rio, the owner’s favorite. In the 1500 miles from home, he’s lost all the flavor, but then again, he’s cooking for White People. The beans and rice were the muy con sabor. Ate it all, guess I was hungry. 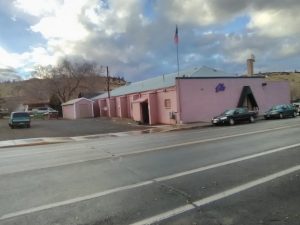 Back to The Lodge to tuck in. I was shown the parking for the overnight, but it was 20 feet from what must be a major rural racecourse. And here, having one’s Sentra sound like a tractor pull is the mode.

I shift over to the other side of the Lodge, farther from the tractor pull/racecourse, but under a streetlight doubling as an aircraft landing light hard by the trash skips. I check with Brad the Fisherman is this okay – it was.

All was noise, even with the Lodge as buffer, but eventually nodded off to be awakened by just what you don’t want to hear camped out in the back of your truck.

Footsteps. My Berreta is a zipper pull away. Night Stalker crunches about, I can see his shadow on the windows, he stops, peers in, but doesn’t touch the vehicle. He’s very gently and quietly lifting the skip lids. No lights, what can this guy be doing? If scrounging recyclables he must be using The Force. No flash of torch. Five or ten minutes of this and the footsteps recede. 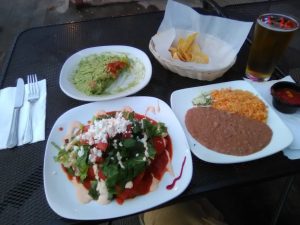