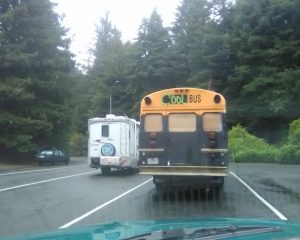 Up groggily with the dawn. To MacDonald’s for coffee and plan out the day. Crater Lake is “only” 271 miles by the shortest route. This then became the day’s objective, in spite of being a long drive.

Crater Lake. Probably featured in one of the Walt Disney Hour Sunday commercials: See The U.S.A. In Your Chevrolet it goes back that far in my awareness. Crater Lake! Today!

North via the lowering gloom (happy gloom) on 101. Another Road Not Taken: another guy might have skipped Crater Lake and taken 169 to 96 along the Klamath River northeast. He could have boodled northeast to overnight in the municipality of Klamath Falls. And then the NEXT easy day he could have been one with Crater Lake.

But that guy wasn’t me, today.

There was another different guy today. I used to scorn motorcyclists (mostly) who wore Go-Pro on their helmets as revolting egoists, as if every second of their life was worth recording. But on the other hand, many of the seminal moments of a roadtrip – if one hasn’t a co-pilot with soul-stealer to hand – occur when image capture isn’t possible (or at least safe).

A deer darting across the road seconds from collision.  A shaft of sunlight beaming down from a part in the clouds.  The skirl of Autumn leaves like a horizontal tornado from the truck just ahead.

And so from the daily terabytes off the helmet come a dozen or so choice moments of the ride. 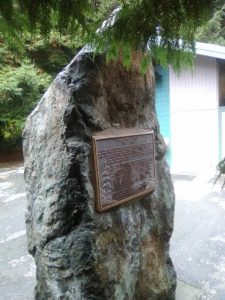 This entire road is his monument.

About 25 miles north of Eureka I pull off to bleed the morning coffee.  This portion of the Redwood Highway is dedicated to William Z. Hegy: Builder and Civic Figure.

North of the Redwood Highway along the coast to Crescent City.

The name comes from the curl shape of the tsunami’s which periodically destroy the town. Or maybe from the crescent shaped curve of sandy beach, which ever you prefer. A fishing town established of the 1850’s its location was first seen by the mountain man Jedediah Smith, for whom the river along which I traced of 199 into the Oregon Territory was named.

Beautiful watercourse, sterling valley, well-maintained road with frequent passing lanes and turnouts. Came out into the sun – Apollo Be Praised – at the top of the watershed and out of the Collier Tunnel.

Up from the coastal wet to high sere valley, Oregon Territory now, as country as Patsy Kline, has a friendly look to it, but maybe it’s just the sunshine and the easy road; elevation 2000 feet and dropping toward Grant’s Pass along the Illinois River, reckon some mid-west farmers put down the plow here.

They also put down the aborigines. With the discovery of gold hereabouts, the Takelma, who had been suffering the …. and this gets boring to write, it is the same everywhere in the West ….  cruelties, abominations and horrors given freely by the encroaching settlers and miners, burst into a last desperate conflict 1855. It is called the Rogue River War which pitted the Takelma against well-armed vigilantes, with the Army trying to interpose and protect both sides.

Like a whiff of perfume amid a whirlwind, well-meaning and thoughtful whites did exist, the Whitman Mission – exterminated 1847 – a good example; and Stone Age peoples wrenched from their primitive ignorance with steel and gunpowder and liquor and syphilis were not Edenic. But in the face of gold, land, power, the ever-increasing swell tide of Whites utterly indifferent to the native peoples is forever a stain upon the West, and our history.

I am no knee-jerk apologist for all things Indian and vituperation for all things Manifest Destiny. The whites of the day were just as ignorant and self-serving as were the Indians. There could have been no compromise between avarice land-greed which reduced the Indians to vermin to be exterminated and the unthinking child-like Stone Age cultures unable or unwilling to adapt to new realities.

Here’s Cave Junction where the two major forks of the Illinois River join. I should have stopped, not that I wanted to get into any caves, but it might be interesting to know more.

Destinations are RoadTrip Poison. They impart Schedule, the Need to Get There when a RoadTrip IS the There. Crater Lake! Today!

Grant’s Pass for Grant’s Gas. Had forgotten you can’t pump your own gas in this Territory. There’s a friendly gal or guy there to help. They can’t unlock my gas cap, they don’t slide their own credit card, but they are there to stick it in, the nozzle, I mean. Gas prices half a dollar lower than in the Golden State, even at the name stations, like this one, Mobil.

Freeway easternish and like a god trace above the Rogue River, beautiful water course, love to drop a line, but andele.

Good, off the four lane at Gold Hill, Another Road Taken But Should Have Stopped Here the direct course east on 234 Through Sam’s Valley.

Sam had it going on. Lush ranching and farm land, maples just dropping their golden red leaves road in the shade shear wet and the cars ahead vortexed a leaf tunnel and I as well.

Should have stopped here and staked out a homestead claim. Oh wait, already taken. I start to gain a feel on why so many Californians head to this Territory. 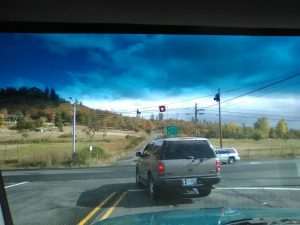 T-Intersection with 62, in my choice: North. Along the Rogue River, so named by French trappers for the local inhabitants, “couquins” for rascals and rogues. Experts at expropriation, but think of it. Your life is what you can hold, your women, coup, horses, scalps, furs. Along come god-like creatures with fire sticks and hard shiny sharp blades. It would be a sin not to take that which is offered by these visitors, would it not?

The dry lower valley of The Rogue transforms, past the Lost Creek Lake to unending stands of pine, like feathers on endless rumples half the size of the world lush and wet.

The Poison of Destination.

Unable to see the trees, their inexhaustible life force for the force impelling me. I have another curse that should not be of a RoadTrip: an expectation. There will be a Lodge at Crater Lake.

Built 100 years ago, an American Western castle of boulders and timbers and towering redwood. There will be a vast lobby with a fireplace big as a 20 bear den, and rustic rooms each with a stone hearth, and a bar as it was in the Gilded Age, my credentials, and time only the road to realize this vision.

Through the ever climbing soaking woods, no black ice this day (one hopes) ever up and there’s the turn off! More empty sodden pavement endless curves and now a lava scarp and more up and up and here, finally, the park entrance.

Its sentinel a friendly faced albino who has seen too much of the people from below, yet still correct.

“The lodge closed for the winter about two weeks ago.” 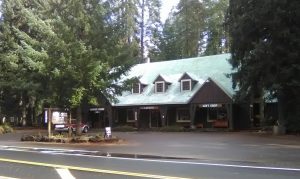 “There is no camping within the park.”

Nothing for it but to backtrack to that …. something 20 miles ago …. Union Creek, wasn’t it?

It was. Cabins to be had. A roadside restaurant. What more could man want?

Josh in Charge cuts me a deal without even time for haggling: big cabin for the price of a horse’s stall. 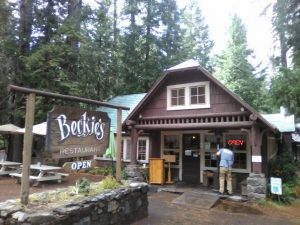 Across the road is Becky’s, serving the traveler since the Harding Administration when those wood-framed, tin-plated 80 horse-power Model T’s climbed the wagon roads up from Medford; wagon roads cut by drovers and their mules 60 years ago tracking the Rogue how ever did they do that?

Becky’s named for the second or third wife of the owner of the Union Creek stop-over, likely a stable and rude hostelry dating from the American Civil War. It is a shack added onto over the decades, the original bit with a bar and booths and a couple of beer taps and a pumping kitchen sufficient for my grazing.

Did not have the raccoon potine with a side of grizzlie kidney you might expect; no.  Had the Hodge-Podge which was an amalgamate of deep-fried toadstools, pine cones and juniper knots…. and a couple of Black Butte Porter – A Deschutes product – that was so indifferent I had several more, just to be sure.

Thirst slaked and belly filled, drove my team to our hitchings. 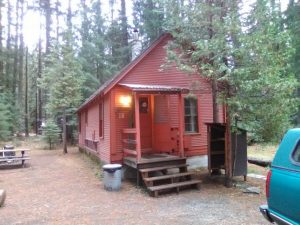 My campsite for the night: The Hamarker Cabin.

It is the Hamaker House, once a forester’s home a way up Mount Mazama, from the CCC days, moved here in the 50’s. Sleeps 7 easy, full kitchen with all the implements I don’t need. Tight roof which I do as the drizzle is relentless, wood-burning stove and some dry firewood in the kiosk just outside the door. 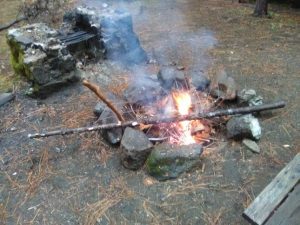 Firepit wants a fire. I scragg some underbrush, build the protopyre, and light. Or try. Everything is utterly sodden, most difficult fire ever I set. Cheated. Butane hand torch drying the tinder until it caught warming then drying the kindling until it too came to the heat, oxygen fuel equation and then the smaller soaked underbrush and pine needles caught.

How can a man smile of the drench of an afternoon, his livery seen too, his small (not in my case) baggage stowed in stout quarters, his fire blazing as if time did not exist, and his expectations Dashed.

Expectations are Ruination. Never more so than on a RoadTrip. I have learned, I suppose.

And as we shall see, I have not learned that hard lesson yet. 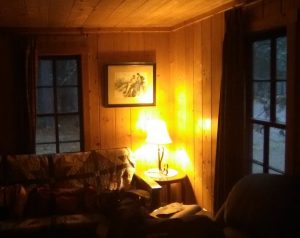 Intended supper across the road, but sagged, that quasi-night of the Eureka Lodge. Down goes the light and with it me.

278 miles this day – one expectation shattered, but had it not been, I would never had known about or enjoyed The Union Creek Experience.