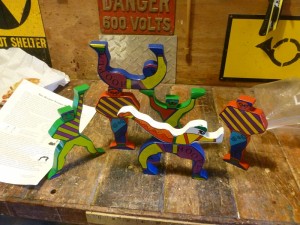 The Hoopla Troupe perform on the workbench and call out for a display cabinet.

Supersmith arrives for the in-home tech support, and it takes him an hour of intense hacking to have his (now mine) Linux driven box recognize my ntfs disc drives.  It shouldn’t be this difficult, but then again, Linux and its stalwart band of adherents prize themselves on not playing well with others.

We then lunch on 17th Street at a pizza joint, my four cheese was a Manhattan 4.6, but the Coronado IPA was a solid 8.7 on the Green Flash Scale.

1 30 – After the reprovisioning trip and jalapeno purchase, it was to cases. The Prize Cases to be given to Supersmythe and The Prof.  I’d previously biscuit-joined and glued up sufficient cedar siding for the box bottom and lid.

Out of the clamps and after scraping of the glue exudate, cut one end of all four glue-ups square (or so I thought), then planed them down to a uniform thickness. And in the process lost my marks as to where the biscuits were at the joint. I’m a cabbage head.  Knowing where the biscuits are would have prevented cutting through them when sizing the box sides since the edges, whence cut for half-blind dovetails, will show.

Got lucky cutting the first two planks – missed the biscuits. It was a 50-50 chance. 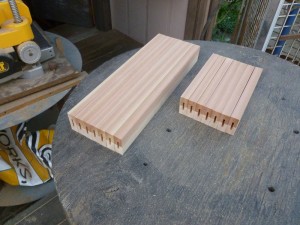 These are the frames for the glass – it’ll be a six-sided case.

2 1 – Instead of busting out the dovetail jig, lamed out the frame parts for the Hoopla Cabinet: 2.0 x 1.5 cm cedar kerfed for glass. Test glued up Frame 1 of 6.

2 4 – Instead of not busting out the dovetail joint, didn’t not bust it out. This time I threw the rule book away and just plunged in. And inside of 5 test cuts arrived at a tight (maybe just a wee tad too tight) fit. 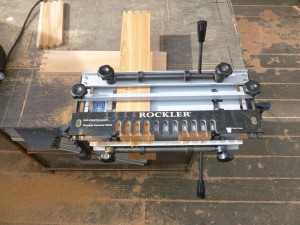 Sometimes a dovetail jig can be your friend, sometimes not.

2 – 5 – Dovetailed the second Prize Case, but with a minor adjustment to the depth of the bit which resulted in a bit less obstreperous fit, but not much. Good to be tight. 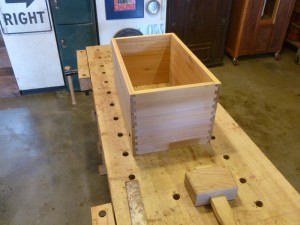 The lid and base of PC1 were maddeningly not flat to the floor.

Why? Amelioration on the table saw only moved the problem inward instead of solving it. Finesse in end game fitting necessary. Maddening.
Glued up Wilder’s Hoopla Troupe Carousel windows 3 and 4 of 6.

Had to do another soul for Jarvis’s pipe – couldn’t match center hold flipping from obverse to reverse. Simple, 10 minutes of rework and the new soul better.  Fun.

Just as I’m propitiating Snaackk the Bird Who Must Be Obeyed arrives The Prof for philosophical inquiries.  Glug.

FOEDAY – Friends of Ed, Ed Ricketts, that is. 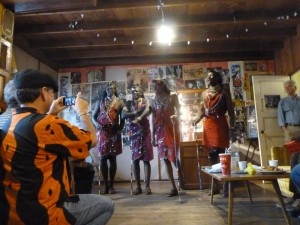 Along with the usual shifting cast of characters, we had five out-of-town guests. Kenyan out-of-town. And not Kenya, Nebraska neither. All the way from the equator. Karuna and his four troupers are on a conscious-raising (and fund raising) good will tour. They were here in The Lab because one of our members, Berkey, got to know them during his sojourn (not clearly understood as to scope, scale or purpose) in their country. Likely invited them over, and so over they came, six years ago and made such a stir (and maybe a stack) they were invited back.

And I’m glad they came. As Karuna said, these lads are not entertainers, they’re just normal Maasai come to share their songs, dances and likely stir up some cash. Once they pay off the VISA card maybe they can return home with a few hundred bucks in their robes. And I’m guessing a few hundies there is like a couple of grand here. Buy some cows, some goats, and if there is anything left over, a wife or three. 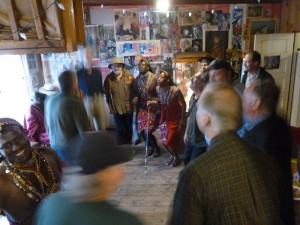 Open, honest countenances, fine robes (very much like Scottish clan tartans) and handsome tinkling adornments. No spears, though. The traditional (at least since metal arrived in sub-Saharan Africa) were brought by Berkey, part of his 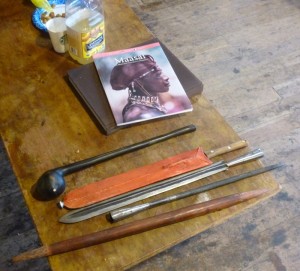 After the fried chicken lunch, the singing and dancing commenced, and this was not a spectator sport. The first song was Enki dwana, which means “coming together” like tribesmen long separated. Next we joined in on Zamba, a song of pride and of wanting learn to be a better man. We didn’ t know the words, but we were game to try, humming along until the chorus, and leaping such as the floor could scarcely tolerate. This is a 78 year old shack, mind thee. We shook the shack 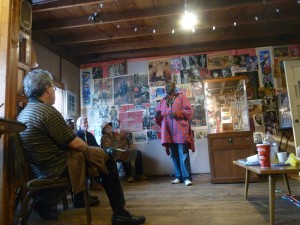 After we all cooled down, Karuna took the floor for some speechifying. And he spoke well. Of how the Maasai live communally, make decisions democratically, and he told a story of how a jealous wife caused the last time a cow ever spoke to man, telling him how to kill him painlessly to feed his pregnant bride.

Karuna spoke better English than many Americans. And had an open-heart sentiment all too often lacking in our society.
And so I spent $20 for $2.50 worth of Church’s Fried Chicken and got a $12,000 experience. Makes me want visit Kenya, see the ground truth.

SHOPDAY – Poseidon, fickle god that he is, cheats us of the main thrust of his sea-founded beneficence. I shall this evening sacrifice to Apollo instead. 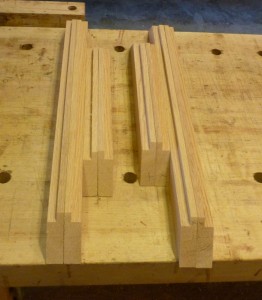 Like a backwards forward picture frame – this oak will hold the floor of the two Prize Cases and the seem between the ply floor and the oak will be underneath the box bottom edge.

Sacrificing no body parts of my own to the powerful devices down-slack, ripped out of scavenged oak from the Eastfield Horror the circumferential bases for the two Prize Cases. Then rabbeted them on the inside to hold the ply floor such that the seem between oak and ply will be under the case sides.

Now, for some personal fun. And no, I kept my clothes on.

A new facade for the Supersmythe Linux Box (Score So Far: Linux 13 – Installing Desired Programs Minus 67).

Assuming that the heroic efforts of Supersmythe can eventually get the box more toward a tool usable for we mortals, it needs (wants) a cosmetic front, a custom case mod in the parlance.  (Send Windows 8)

I had figured for walnut flanked by alder, but my walnut planks were about a centimetre too narrow for the plan; and so I cut tongue and grooves in four slats of mahogany and glued them up. The main challenge subsequent to unclamping is to put a hole for the DVD drive, flank the plank with alder, and install a light of some sort and a switch. Who has more fun?

FUNDAY – San Francisco got pounded with rain and high winds. We was cheated AGAIN!

Good news is that there was only one power spike and no power outage.

Innage: Glue up the Prize Case base frames, and then address the Case Mod.

Specifically – route a hole sufficient for the protruding DVD. At first I though to make a template and using the pattern bit in the trim router cut the hole, but when I went to the router table to form the template, I thought, “WAAAIDDAMINUTE!” Why form a template when I can simply route the hole in the mahogany.

Which I did. Less than stellar. Mr. Christman gives me a G- based mostly on enthusiasm and no traumatic finger amputations. 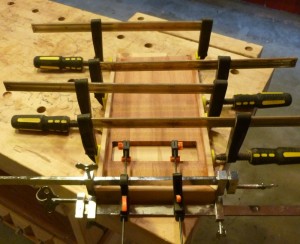 Glue up was a many non-splendered thing. Too many moving parts, offsets and geechy 45’s. No bonus for me from the Shop Foreman this week.

But then again, I already had my bonus in The Lab on Friday.

2 Responses to “Troupes – Hoopla and Maasai”