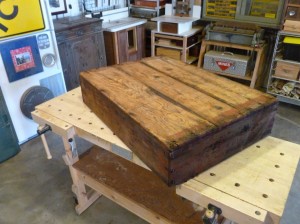 4 17 – I have been enjoying modifications to a farm crate these past two days. It’s a low, long box apparently, I am guessing, to be the field repository of fruits off the tree and the transport to the collection shed.

About 3 feet long, 2 feet wide and a foot and a half deep made of redwood, and showing years of knocking about.

Wilder, the Grapes Stakes King dropped it off last week wondering should we make something of a table out of it.

We should, and I want to make two incarnations (on spec, mind you…), one just upended with legs, low, coffee table shape; two, the other, same coffee table height, but with four drawers.

It is on the later that I am now obsessed.

Yesterslack’s effort was to rough, and I mean rough, out the drawer openings, two on each of the long sides, using Harvey’s 1970 vintage sabre saw. Even using an edge guide it was like skiing on barrel staves. 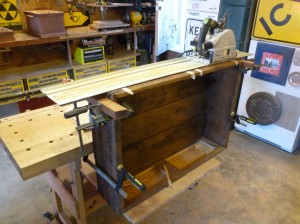 The plunge saw feature got the long cuts.

Thus, this day busted out the Festool circular saw and guide rails to square up the openings. And did.

Now that the opening are established, and I’ve accepted blame for cutting two different sized fenestrations – one 32 cm in width, the other flanking 38 cm in width, I have to plan for some internal partition by which the rails on which the drawers will slide, can be fastened. 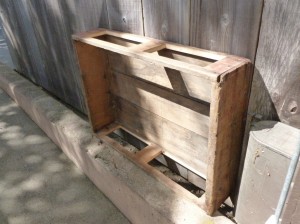 Now, with the openings set, can turn to designing / sizing the drawers. I wisht I had sufficiently thick aged redwood for them, but do not. Und Zo it’s the scavenged 1/2” ply.

Hours in the making, particularly the inset kerf joints, but satisfying in a way that getting close to planned tolerances can be with OCD.

HEY! Here’s the Grape Stakes King himself come to check out my earnest but faulty effort to joint two 4 foot lengths of grape stakes into 8 footers. Seems that there is a market for 6 foot grape stakes and the supply of same is insufficient.

Insufficient could apply describe The Grape Stakes King’s mandate that I try to join two stakes with a simple 45 cut, glue and nails. 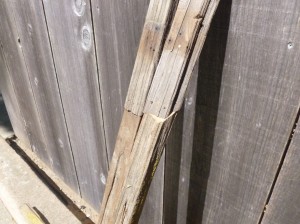 There never could have been an acceptable joint, either cosmetically or structurally …

But I knew that going in.

The result is anus acne ugly.

There’s a better way: finger joints. But there’s still a problem: no two grapes stakes, weathered from decades in the field is the same cross-section. Any attempt is fraught with buck teeth chomping on cheek.

Check. Back to the Slack Deck where knocked out were the 16 sides for the four drawers for the Farm Crate Table. I opted for kerf-inset joinery. Many times tried, but this time much closer to the ideal. 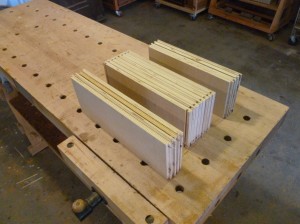 4 18 – Today’s action, after a run to The Dump with The Prof – finally got to see the disposition of all that construction waste we generated at the Eastfield Horror demo job – was on the Farm Crate Table, specifically, glue up the two (not too) wide drawers.

Thence, render from on-hand grape stakes the angle trim for the edges of the drawer fronts, drawer fronts that once were part of the two long sides of the crate, which I saved.

The semi-fun part was after sufficient trim was formed: cutting the end trim to nestle into the long sides and hide most of the long side edge trim end grain. Working with bent and flawed former grape stakes, butt joints at the intersections, gaps, inconsistencies, cracks, holes, fissures all with no intention of any finish save what time and wear will impart. Imagine a budding classical concert pianist working a gin joint nights the wrong side of the tracks ….

Success. Praise and honours for the non-participants.

More Farmer’s Crate: glued up the short two drawers, then fabbed out the drawer runners. Simple 4 x 2 cm lengths of poplar for the two 60 cm reach, pine for the four shorter 30 cm stretches. I can go no further with this project until I have legs.

Cased the lot for suitable timber, but have nothing that is quite right. It’s either rustic enough but too narrow in the cross section (I figure I need a minimum of 2 1/2” in that department), or sizable enough but too lumber yard looking.

Und zo, I formed the part for a sling shot.

The interesting bit was welding steel rod to a bracket beneficially shaped. I’ll put heat shrink tubing over the structurally sufficient but anus acne ugly weld. The bracket will be fastened to a slab of oak, and inset into the oak will be a handle shaped to fit my right hand.

Reason: The neighbourhood has this ‘winter’ (we had about three weeks of winter this year) has been invaded by acorn woodpeckers. In their imbecility, they peck on anything wooden, which includes Castle Slackton. They Must Be Stopped.

The acorn woodpeckers lodged in the oak tree across the moat Must Be Killed. To this end I’ve a sling shot at which I am practising (in front of priests and so far as I can tell, nuns).

But I need (want) a better lodgement for the instrument than the fourth incarnation yet created.

A Wall Mount with pebble storage.

I call this into being.

Flush with the lack of accomplishment up pulls The Prof, his drayage filled with dive tanks. Do I want to accompany him to the commercial dive shop were to get my 7 years out of service tank recertified and my breather checked out?

So I load up my dusty gear and off we trundle. 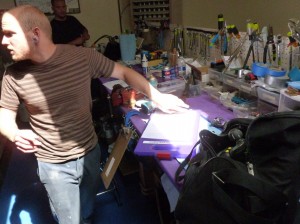 This is the man we are trusting with our life support equipment.

It’s a roll-up door in Sand City, the anthracite-black Andalusian cattle herding dog greets us, a good sign. Another sign: to work at this dive shop you must pierce your ear lobes and insert garden hose washers.

Still, they seemed competent and their $50 for the tank re-cert and the estimate of $150 for the regulator check-out was not out of line.

Once and if our gear is returned, we’re good to Dive Dive Dive. 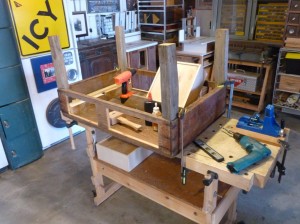 Installing the drawer runners: fun in a way that isn’t really all that fun. Funny ….

The Farm Crate Table is finished, and it about finished me. I made the mistake of installing the drawer side rails within 1 mm parallel, but forgot to determine if the crate itself was square.

Naturally, it wasn’t and so the drawers are skewed to the face of the crate. This mandated some creative rail shaving such the drawers would be flush with the faces. Cripes.

The last two tasks were to install the drawer faces, and then level the table.

Installing the faces was conducted by a time-honored Johnson Arts method: tap into the face of the drawer on to which the drawer face will be installed a couple of brads, and then snip off their heads. Using a spacer to standardize the face position upski-downski, I then pressed the drawer face onto the cut off brads. These pin holes thus establish the position of the drawer faces. Glue and screw followed.

As to leveling, I put the table on the floor and in spite of a disparate leg length, it sat almost perfectly. 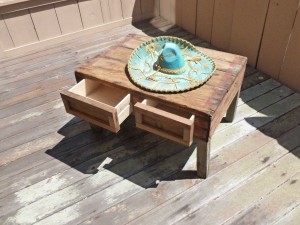 Sanded the ends of two of the legs a bit and called it DONE.

There’s a roar down the castle approach which is either one of Rommel’s panzer divisions, or the Grape Stakes King in his Dodge Ram diesel. It was the latter. No, not to collect the Farm Crate Table, which was highly desired as it is occupying vital real estate here in the wareshed, no, to drop off the bounty of one of his San Joaquin prospecting expeditions: 136 wine stained 36 inch long oak slats. 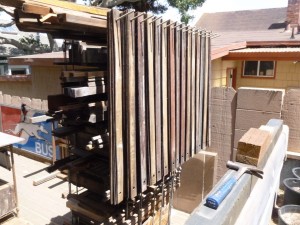 Here are the flavor sticks enjoying the morning sun out on the Slack Deck – they’re about the length and girth of a yard stick.

According to The Grape Stakes King, these slats were ‘flavor bars’ inserted into wine barrels to infuse the vintage with tanins. Now surplus and available in the thousands. Can I make something out of them?

I can indeed. Wine bottle racks was Idea #1.

Here’s a 4-bagger atop a raisin tray.

And so over the past few day’s I’ve kicking around some concepts for such racks. First out the R&D Lab was a four bottle bagger. Next were a pair of five baggers. How to stack them?

We are currently, here in R&D Lab stymied on that one. The slats are 1/4” thick. The shortest brads available for my nail gun are 5/8” and so more creative thinking is required.

As to the extant racks, they are simple, solid, straightforward to make and can be easily shipped as when unassembled they pack down into the size of a couple of 18” rulers.

Efforts here at the Pacific Grove Annex of the Wheelwright Grapestakes Research & Development Lab were focused again on New Product Development. To their credit, the lads down in the shop pulled themselves up by their wine staves following yesterslack’s crash and burn and turned out two new products.

Well, one New Product and another variation on an existing theme. Haydn did it, Mozart did it, Brahms did it, Tchaikovsky did it, why cannot they? 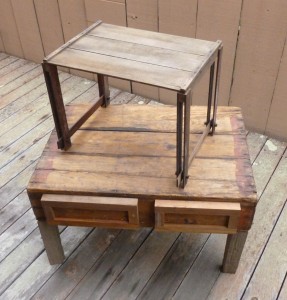 New Product: meld an on-hand half raisin drying try with legs, legs formed from oak flavour sticks. Simple in concept, less simple in execution. Simple enough was cutting and nailing the legs to the raisin tray. Less simple was introducing the dowel through the nether end of the pair of legs. The (almost but not always) half inch hole in the both ends of the flavour sticks, which themselves vary in width and thickness do not line up such that the Lab Boys could effortlessly insert the dowel of questionable lineage (and diameter) through all three openings.

In spite of these grave challenges, in the end, they emerged triumphant and a new pseudo-table quasi-stand was created.

Next – form two more 5 banger wine racks to stack. Clutch was the vertical support infrastructure, which The Lab determined to be riven flavour stakes, about 2.2 cm wide clapped athwart the end projections of the extant top and bottom wine rack(s). Yes.

Worked out to be more sturdy in flex, side-to-side and OSHA compliant than computer models had predicted.

The May tours of PBL were this day. They went from terrible, to well done. Leading off at the 0900 slot was McCleary, who failed on just about every category from arriving on time, which he did not, to getting his facts right, which he didn’t.

Next was Hamilton, the Aquarium Connection with his inaugural show; and while his avuncular, rambling, doddering delivery was a serious demerit, his biologist’s slant and connection with the Aquarium are and will be an important story.

Batting clean-up for the 3:00 tour was the inaugural début of Supersmythe, who in spite of some minor factual errors was the stand-out show of the day, for a first effort.

And I made five dallahs in tips. 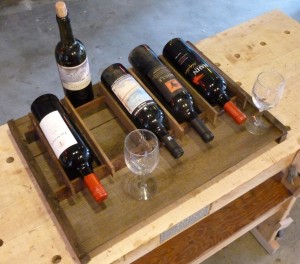