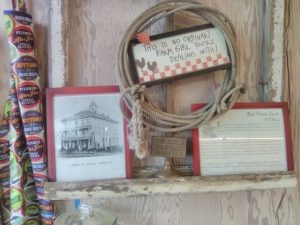 The lower left picture shows the original hotel on this site, regrettably effaced 1958 to be replaced by the present accommodations circa 1960.

Coffee with Brenda downstairs in the store, locals (she’s only owned the place for a year, so she says, but has made good inroads) in for gossip and why didn’t you deliver those rolls? Doggies in cribs back of the pickup, hound dawgs, they hunt much coon hereabouts?

Brenda asks won’t I stay for the shopping – open at 11. No. Not much of a shoppie.

She suggests I take in the cemetery out the Grizzly Bluff, which was the route I intended to take. Always grateful for ground truth. 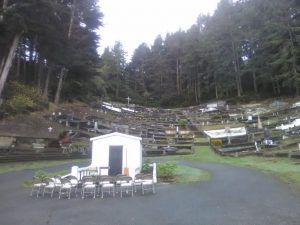 All Soul’s Day at the Papist Memory Bowl

Up the Victoria Inn and a left along the wagon road put in above the flood level.

And there it is, in a natural cove, wonder if the god-fearing got higher up when it was first established, or some kind of natural progression took hold.

All Saints Day, the observant arrive to bless and remember all the passed by and passed on. Here, in America, 2018 these rituals, you wonder. 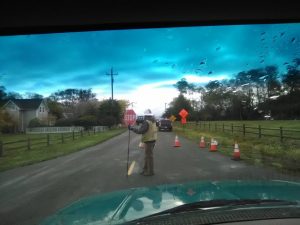 The only other way was a circuitous back-pedaling via the village and out to the freeway.

No Grizzlies seen this day, I had even shaved. Some grizzle though at the Williams Creek Bridge, currently under repair, fellow says it might be half an hour, but he’ll see what he can do. He did well, my delay was about 2 minutes.

Except for the pavement and the farm machinery, this pastoral paseo could be been 80 years I the past, country all dairy and pasture and hay for the winter.

Next stop for gas: the greater Rio Dell – Scotia municipality. Guy with Red Skelton hair and purple fingernails trades me electrons for fuel and coffee.

Scotia was a company town from its founding 1863 until 2008 when the Pacific Lumber Company folded. The mill (very big and they are hiring) is back in operation, and likely housing here is very affordable. I’d like to return and stay in the 1920’s Hotel, the Scotia Inn.

The phon-o-camera automagically created this panorama of the mill at Scotia – I wish I knew how, I’d do it again.

Scosshed out of there to freeway way (where there is same) south. Again, to where?

Gualala, that’s where. Why? It is a handy distance – 214 miles via Willets and Mendocino – and I hoped to recapture the good time I had there on a roadtrip 2006. This was doomed, however: expectations are the death of exultations.

South along the Eel River, the way I’d come last week, breaking out of the hovering, happy gloom into full-fledged Autumnal sunshine. Traffic light, speeds good until the inevitable construction one-lane stop. No matter, let the conga line pass as I pull over for a slash, and then I knew there would be nobody climbing up my six for 15 minutes.

No turn to the coast this time at Leggett, the road tops off just shy of 2000 feet a few miles after leaving the Eel River South Fork to descend into the upper plain of Ten Mile Creek hereabouts to Laytonville – founded 1874 by a guy named Tarzan …. okay, okay, it wasn’t Tarzan, or even Lord Graystroke, but a Nova Scotian blacksmith named Layton. The first settlers, I mean land grabbers must have gone nuts: well watered, flat, embracing hills, fine ranch and farm country, once you cleared away all those annoying redwoods.

20 mile to Willets and gas. Notable for the California Western Railroad that climbs the intervening hills and down into the Noyo River valley and thence Fort Bragg – I’d like to take that ride someday – also known as the Skunk Train. Also notable for deadly feuds and a triple lynching. But not today. And happily, not me.

The trail from Willets to the coast – Route 20 – was a recapitulation of the dread Orr Springs Road, although with better alignments, grades and pavement. How do those log trucks go that fast.

In the fullness of switchbacks, make Coast 1 just south of Fort Bragg. I could have completed my vow to return for an overnight or two to that beckoning town, but no. Again, the Tyranny of Destination: Gualala 60 miles to the south and a faint hope to recapture the past. 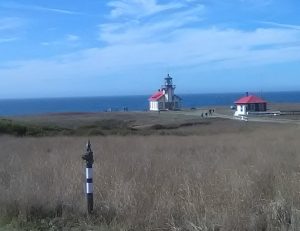 The cheap sleeps here at the Light station start at $350 per and go up to a thou.

Here’s a turn for the Point Cabrillo Light station. You can stay in one of the lighthouse keeper’s abodes or in one of the two cabins …. if you’re rich.

Onward southward – ignoring Mendocino – in a leisurely manner. The hamlet of Albion would have been an excellent overnight, plenty of lodging and camping opportunities. But no. 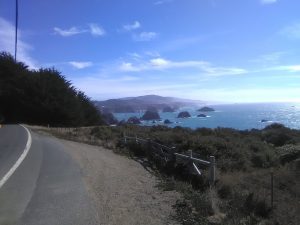 Beautiful, unspoiled (mostly), sparsely peopled coastline which Coast 1 climbs and turns and wheels and dives from high tableland to shoreline. Clearly time to open the cooler.

The wide spot in the road of Elk would have been a good overnight, but no. Same with Point Arena.

In the fullness of afternoon: Gualala.

I had hoped to stay in the motel of memory, The Surf, but it was now under the management of one of Satan’s younger son’s who had the customer-facing skills of a palsy-wracked mortician. Worse, he was immune to haggling, and even more worse, his bloated prices were a hundred short of what would have been traded for the suite with fireplace I had of memory.

Thus soured by Mr. Dickwrinkle, cased the town’s other hostelries. Hotel Breaker’s did have a room, at $10 more than Mr. Grumpy Tosspot, but if it comes to that, I’d rather give it to them. Here’s the venerable Hotel Gualala (1903) but due to the pernicious American’s with Disabilities Act prohibitions, it cannot offer lodgings. 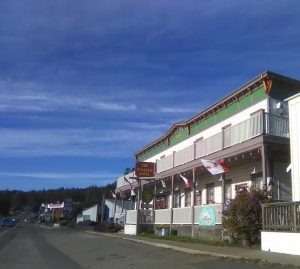 I would like to look this good at 115 years of age.

Next: The Gualala Country Inn which looked more like a freeway-close City motel, but the proprietor was of the haggling space and for $100 cash money, I had a bed for the night.

After unlading to room 126 (upstairs with, as I discovered, a natural sonic collecting focus for any and all roadway traffic) I was out and about the town, principally the bar at the (not) Hotel Gualala. 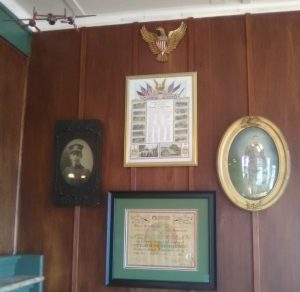 Curious spot for a war memorial, but then again, the hotel likely was the town and civic center for decades.

Hospitality: full bodied, although not quite reaching the tactile rewards those fulsome bodies advertised. 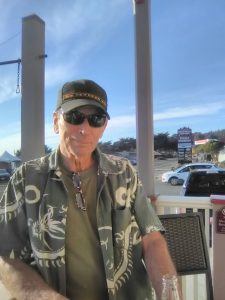 A man for all seasons, climes and times.

Clientele: engaging. Here’s Craig, man about trades, trucker, gigolo to Mexican sporting ladies, aspiring musician, and woodworker. We enjoyed a few moments of conviviality until I was compelled to seek sustenance.

I blundered again. From memory there was a ramshackle hut perched on the cliff across the road, but today replaced with a concrete, chrome and glass gustatory temple: Vu Kitchen. I was lured into the place by the owner when I was casing the burg, but an hour later, he was gone, and with him any enjoyment. 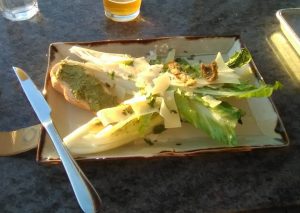 Some people believe that food should be art – I am not one of those people.

My fault, I suppose. Poor menu choices, although the raw oysters were as good as sopping sea boogers can be, the thing they called a Caesar salad looked like Neptune’s codpiece, without the flavor. Worse, the service – this in spite of the scant patronage – was glacial, my glass runneth unfilled. I made something of a scene at the bar, had my meal, save the beer and oysters removed from the tab, and I left in umbrage.

Again, my fault for having expectations. Expectations are Always to be avoided. Have I learned? Hard to manage want’s.

Thus the day eased away on a sour tone. 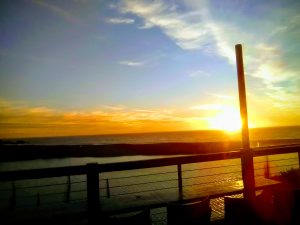