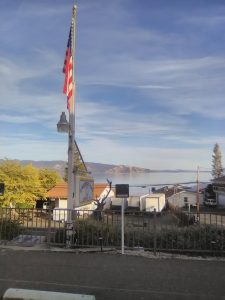 The day comes slowly, dawn an hour away on breaking camp. Back to the gashole for the morning’s rituals, coffee and ice.

What should have occurred was to verge northeast. But I didn’t consider it, or did, but with little verve.  Strange.

And now, looking more closely at the maps, it would have been impossible: there is no direct route from Lakeport toward the northeast. I would have had to take 20 east to make the Sacramento Valley and only then could I begin to edge northeast.  The most direct route toward that which is unknown is not a straight line.

As it was, I opted for saltwater. No reason, which makes the best reason.

The voyage north on 20 from Lakeport was a delight in the low morning sun. The country here is unlike any I had yet seen of the Golden State. Very much like the Appalachia’s: human-sized valleys where a man could clear enough to farm, hike to the near, low hills, feel his feet grown into roots. Autumn color was prominent.

At 101 jumped south a bit to Ukiah to find the Orr Springs Road, which crossed the mountains to meet the sea just south of the charming hamlet of Mendocino. It was the wrong road choice but for the right reasons.

Miserable, miserable donkey path. Potholes riddled with potholes patched onto potholes; switchbacks up and down so steep I could smell my brake pads melting. And cloaked in fog.

Orr Springs….I’m there but I do not know what there is. Half a dozen not small buildings, no signage, 50 vehicles spotted in the lots, no one in sight. White supremacist enclave? Cult headquarters. Maybe not, here’s the website.

In spite of how wretched is the road, there are hundreds of people with ranches and homes all along the dismal trek through sodden forests, and even small clusters of homes at Comptche. These are people who if they aren’t off the grid want to be. 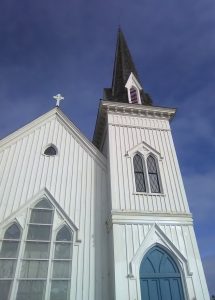 About an hour and a half to do the 36 miles between 101 and Coast 1. And here is the village of Mendocino, not quite woken up yet. I felt strange being there, felt I was NOT there. Felt the pull of the road – Go, Do, See, Drive – that’s normal for a road trip (and me). But I didn’t feel I was Here. Had a snack, than slacked off north.

Now forming a vague idea that I should overnight at the Eureka California Elk’s lodge. But first, let’s take in Fort Bragg and try, really try to Be There.

I liked what I saw at Fort Bragg. Named for Braxton Bragg – like many of his military generation, particularly southern born, West Point and Mexican War veteran before joining the Gray – by a subaltern who established the army post 1857 to over-awe the local aborigines. It was abandoned just after the Civil War, but kept the name. Became a lumber town in the 1880’s – a remnant of The Union Lumber Company’s logging railroad, the California Western Railway, more colloquially known as The Skunk Train, still runs excursions. 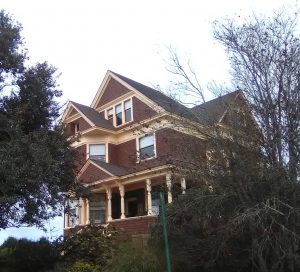 Named the Skunk Train because the railcar was gasoline powered and the stove inside the car ran on kerosene, a combination unpleasing to the nose. I passed on a ride, but took in the Guest House.

Originally conceived as the mill manager’s residence, it became lodging for visiting businessmen. It is a stunning Victorian mansion, overwhelming intricate detail, all prime spruce and redwood. It is now tricked out at the local history museum and it would take the shank of a day to take all of it. I felt the Road Pull. And felt I’d like to return to Fort Bragg for a couple of days, should there be a future. 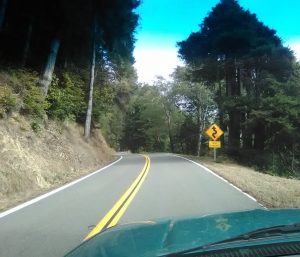 The way of things from the coast inland to Leggett and 101.

Been this way once before, south tending, why I wanted to see Mendocino and Fort Bragg, again. This time north tending, still the same steering wheel wrenching, tire scouring, switch-back switching forest lowering big green windshield filling challenge. All to get from small roads to a small road with big potential.

101 is funny hereabouts. Freeway drops down into forest road two lane. Two lane magically transforms to freeway. Logging trucks and spurting BMW’s and VW vans and caravans of sports cars and me, just a tiny RV in the form of a Chevy. Road roams and rises, rises and falls built up and down river courses, drop a line from a bridge if you’ve 150 feet of it just to get the bait wet.

The Eel River. The roadway pioneers of the 20th Century followed suit of their forebears. Always, always the path of least resistance. But 1960, we built heroic bridges, no curving and shirking hillsides for US! Spanning the Eel again and again, hillsides detonated carving clefs moderate the grade up and down again and again to the river always the river as we wend.

The thinking: this state is long to the north and south, we got east and west, we came that way, but how to do the north to the south. So the 101 North north of the old mission trails to the new O-Re-Gon Territory, might find some scratchings up north and them that’s north ought climb down out of those fogs toward the sun, maybe.

Those freeway parts are over and around the Eel, high above and civil engineers of the Can-Do mid-century era designed and built them. Men too with dozers and TNT and time and money and detours and hope for a better tomorrow. You cannot cross one of these handsome articles of engineering without marvel, sailing like flying like eagles soaring over the river. Crossing a dozen times the Eel in as many furlongs; well, maybe you can forget that men and will and steel made it possible, but I didn’t.

What is travel? Simply to go somewhere? I think not. Travel is to be somewhere, be what there is there….at least in as much as, as Ed Ricketts says be the IS. Cast off the self-imposed shackles of one’s own perception, his relics of regrets, her ties to The Gone which is The Past to Be the place, now.

Difficult. Yet worthy in the aspiring.

Now. North 101. And yet not now since the Ahead was lodgings at the Eureka Elk’s Lodge….wherever that is. Job: find Lodge. 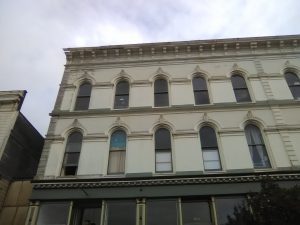 Holes in the roof? In this rainy climate?

Coast all mooked in, likely normal this low gloom. Wander into the old part of town. Halloween parade for all comers, nice costumes. None needed for the strung-out drug addled homeless meth-heads. Contrast on the brick-paved streets. Strong sense of civic pride, much effort in restoration, still there are roofless buildings and squalid empty lots.

More to cases:where is the Elk’s Lodge. Hey! Here’s the downtown Museum, they would know. Originally the Post Office, well,not originally, this heroic edifice built 1904 in the Greek Revival Show The Town Pride Price. Beautiful. Wished I could have stretched out my bedroll there.

No, Lodge east of town just across the arroyo from the golf course. Can’t miss it. 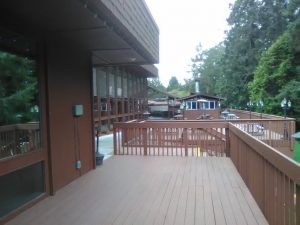 The Eureka Elks Lodge back deck is bigger than then entire Lakeport Lodge.

Luckily, the Lodge loomed large just across the fairway. BIG lodge, sprawling mid-Century low-slung Frank Lloyd Wright Eeno Brasilia City architecture, and the bar was well manned. Well, well womaned by Bridget (married, too bad) but with all the hospitality a parched traveler could want (except for almost all). 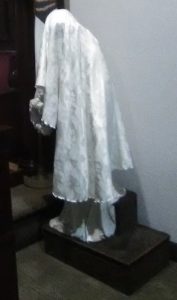 In spite of this, still docked $25 – the full hook-up rate for buses – for my billet overnight. Beats hotel rates. After taking the lodge Chamber, which is probably against Elk Rules….most impressive chamber I’ve ever seen, something out of an 18th Century men’s club and what’s this? 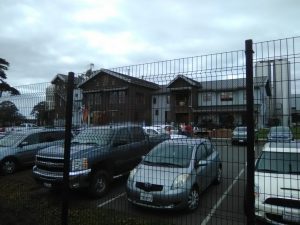 Avanti – off to Lost Coast Brewing. The place is like a cartoon, and fenced off like a prison. Huh? Inside, there’s somebodies wedding or divorce shower, and there’s no food – it’s just a tasting room. No good for my plans.

Down to the downtown to lurk. Eureka was founded (by the Europeans, that is) 1850 as a port to supply miners in the northern gold fields. It came late the game because its large bay and its narrow entrance were typically obscured by weather. Once founded, Eureka became the north’s center for redwood lumbering and shipment. 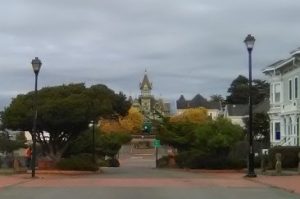 Much civic effort has been invested in saving the Victorian old town. Some buildings are completely and elegantly restored, others languish. A plague of the homeless, the drug-addled, and the down and out scour this 19th Century living museum; yet the locals seem not to be deterred. The downtown was hosting a family Halloween parade when I checked into the town museum.

Now, I checked out the local restaurants and booked a barstool at Mazzetti’s. Affable service, adequate pepperoni, onion and olive pie – a California 6.9, which makes it a Manhattan 3.2. You sit in the rooms now the bar, there the kitchen, yonder a dining area and wonder at the transformations, the different purposes. I guessed where now I lounged was once the lobby of a hotel. Dunno.

Know: Lost Coast Brewing has a brewpub just a block away, didn’t know then – but you can’t know everything. 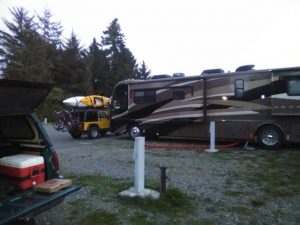 Back out to The Lodge at dusk to settle in for the night. The Lodge was hosting a modest dress-up party, if added up, the age of the band would have been about 1,234 years, so likely not to be much of a clamor.

Clamor of a different source there was. I’m all nicely tucked in and then pit, pat, tip, tap….pit….pit pit….What the!!??? Oh. It’s drizzle growing into a modest rain. Nice.

Or it would have been except for that silicone I used last week to seal the weather stripping between the truck cab and the bed cap. It has been frayed which allowed rain to drizzle down the rear cab window. It never spritzed into the sleeping chamber, but it was annoying, and so I ran a bead of silicone to seal it.

It was one of those ideas which seemed like a good one at the time, but turned out not to be.

As the drizzle is maturing toward actually rain: bong….(count 7 seconds) …bong ……Bong ……Bong. WHAT! There’s nothing like an upended tin can outside, there’s no tree overhang to drip on to anything. I put my ear to the inside wall of the bed. DAMN. It’s coming from the truck.

Numerous exploratory ventures out into the rain, barefooted on gravel and no short consideration resulted in this deduction: Now sealed at the top, the rain was draining down the sides of the weather striping but flowing all the way to the inside bottom, and then dripping off. Dripping off 2 feet directly onto the 9” diameter, 2’ long resonance chamber otherwise known as the muffler. Bong …….. Bong …… Bong accompanied by a pianissimo tap …. tap ….. tap onto the frame.

No expedient of stuffing socks between cab and cap, no insertion of plastic bags into the gap interfered with water’s natural impulse to flow downhill, and in this instance, create the Water Torture. 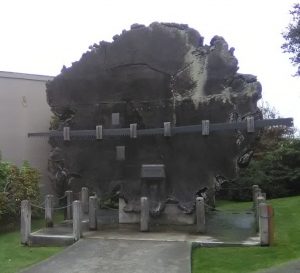 Torture II. The Lodge is platted next a ravine the far side of which is a golf course. I golf course which employs artillery shells all evening until dark. Shells (fireworks, maybe) intended to …. to …. what? Keep the homeless from bathing in the water hazards? Or maybe fend off the seagulls or geese ….?

Torture III. The main artery from the freeway into the town proper, and its eastern residential district, runs right past The Lodge. The traffic never stopped. Apparently, by Humboldt County Ordinance, one in ten vehicles must be retrofitted with amplifiers to render their sound to that like panzer tanks. Likely this is a safety measure to warn other motorists. You could hear Rommel’s couriers coming for miles, and departing for the same eternal period.

Sleep was not easy.