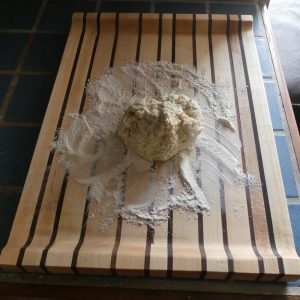 No, not the machine that digs out for underground utilities.

Trencher is a shallow wooden trough for serving food; the word comes from the French trenchier, meaning to cut or slice meat.

One could do same on this version, but it will be used to knead bread dough.

Until the 16th Century, when porcelain began to arrive from China (hence our word for dinnerware) rich people ate from pewter. Normal blokes and blokettes like you and I ate from slabs of wood – trenchers – IF we were lucky enough to have anything at all from which to eat.

During this project, I learned half a dozen ways how NOT to do it.

Formed from maple and oak, it required all the pieces – except the flared and beveled side edges to be milled to roughly the same shape.

The major learning: Router CNC is the way to go. Sure, I could have used the plywood template and a pattern bit. But this technique would not have worked for those flared and beveled sides.

Not much of a carver (yet) resorted to tilting the table saw blade to make the bevel, burn baby burn. Much sanding ensued.

Maybe a sanding mop would have brought it all into focus – why do I keep finding tools I think that I need that I do not have?

Were I to do another, or similar work requiring 3-D shaping, I would consider buying a used CNC, the new jobs sufficient sized start at about a grand.

The first dough on the trencher – OI! I need a rolling pin.

But those raised and flared sides prevent me from using an ordinary pin.

Sure, I could have cut off a 9” length of closet rod: Done. But where is the fun in that?

Having no logs of sufficient length or straightness, glued up some maple.

Having no wood lathe, build a box in which to turn the blank against a router blade.

Be the first to review “The Trencher” Click here to cancel reply.