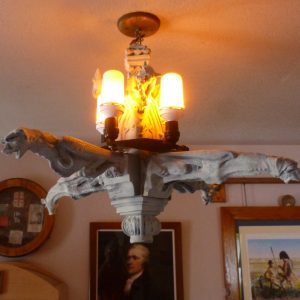 Its arrival just as curious as its nature: rubble in the form of a chandelier. Most of the pieces pulled out of the trash at Tor House, say’s its deliveryman, my fellow docent there, The Professor.

Plaster of Paris (and more of Paris because it turns out these gargoyles are modeled on those of the Notre Dame).   Much of what is missing can easily be patched, once the fractured bits are re-joined, but what about those two missing heads? I’m no sculptor, am I?

But, since overall, the piece is, well rugged, how can I muck it up?

Famous last words, I know. But I pitched in, starting with the easy glue-ups.

Now, how do I replace the missing ears, lips, horns, tongues and wings? Here’s the goulash called Durham’s Water Putty. The marketeer’s missed; it should be called “Quick Rock.” Mix it with not overmuch water and it works like modeling clay, modeling clay that easily adheres to the existing plaster, and inside of 10 minutes is stone-hard and suitable for sanding.

But what about the chandelier, you ask, where were the lights? I am so glad that you have ask’ed. The debris came equipped with candelabra sockets in the mouths of the four gargoyles. Sockets the likes of which I have never seen before. European? Mid-Century? Yet the wire was relatively fresh. Strange.

Strange too my inclination NOT to replicate the monsters biting sockets. I’ll think of something else.

Meanwhile, I’m facing my fear. My fear of sculpture: how to re-create those missing heads.

Nothing for it but to pitch in, lump the Quick Rock on and then …. then I don’t know, but something. After all, the thing is grotesque; how can I muck it up? Thus a sterling learning opportunity, yes?

As it turned out, I am semi-pleased with the dinosaur eagle goat, less so with the dilophosaur fish dog, but what the hell.

With all the repairs complete, it was time for the real fire.  I lammed around the central spire an oak support for four sockets.  Almost Fire.  Flame Bulbs, lacking only in shooting embers and the proper sound, these create a spooky good torch effect (alas, the flame effect does not show in a still image).

Be the first to review “The Gargoyle Chandelier” Click here to cancel reply.