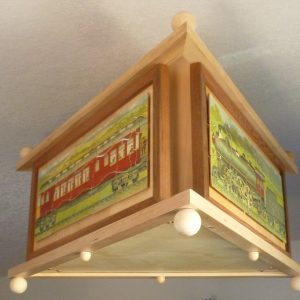 My mother, when six or so, played with this puzzle. Likely memorized the number of sheaths of grain standing in the fields of the background, made up stories about all the faces in the cars of the train. She wondered where it was going, where it had come from as she put the pieces together, took them apart and again and again a hundred times.

Until it was forgotten.

Somehow, thanks to my sister – Keeper Of The Family Artifacts – it came to me.

How to display this memory?

Array around the periphery of a cylinder – which was my first, worst idea – the diameter would be about a meter. Too much.

When confronted with design challenges, I typically slack. Meaning I stew about the thing for a time, then put it down.

Strangely enough, through no fault of my own, a solution percolates into consciousness.

There are six puzzles …. what if …. there were only three frames and a puzzle on both sides….?

After that revelation, the thing pretty much created itself.

A three-sided framework (always intended that the display be hung from the ceiling) with some means by which each of the three panels could be swapped reverse to obverse.

Be the first to review “The Train Jig-Saw Triptych” Click here to cancel reply.