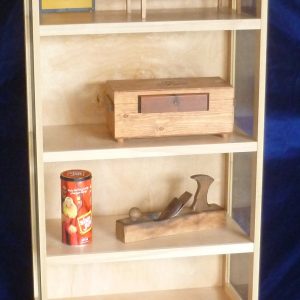 Presented here is an hybrid of a Linen Press, Armoire, and bookcase. A Linen Press is typically a tall cabinet featuring lower drawers and large doors to the upper portion of the case. Armoires may or may not have lower drawers. And some bookcases may have doors.

The genesis of this amalgam was simple: two 5 foot long glass shelves, scavenged at The Dump and loafing around far too long, not earning their keep.

Did I need/want a case housing two, horizontal 5 foot long shelves? No.

What if the shelves became vertical supports for….something.

I started with the bottom of the case – the base – because its construction and features – the two drawers held shut by a concealed latching mechanism – were more interesting and challenging than the upper portion of the case.

The base is a simple plywood box open on top with a cut-out front as opening for the two drawers. Circassian walnut formed the trim, front and sides, and also horizontally across the top front and top sides.

The legs are maple, tapered to lighten the form.

The drawers were formed, in the main, of salvaged bamboo flooring and slide on maple runners installed inside the base.

The concealed latching mechanism is a simple lever system. Pressing upward on lever just under the lower front trim retracts a hardwood clothes pin registered (in the at-rest position) against the inside lower lip of each drawer. Once the clothes pin is thus retracted, the drawer(s) can be drawn out.

The upper case is poplar topped with poplar and oak trim. The sides are those glass shelves. The two main challenges were to drill the holes for the shelve supports precisely in each of the four vertical stiles so that the shelves would be level, and to form the stub tenons on the rails which register in the kerfs of the verticals. More fun.

The former was accomplished by using a simple drilling jig where the first hole forms the register (a dowel) in the jig to locate the second and subsequent holes. The stub tenons were made using a tenoning jig on the table saw.

Once the two sides were assembled, they were joined to plywood, top and bottom.

The base was formed so that the upper case would nest into the base – the trim was 3/4” high – which cloaked the nails and screws used to lash the bottom of the upper case to the verticals. The nail and screw holes of the case top were concealed under trim.

The shelves are plywood with poplar facing which both hides the lamination of the plywood and imparts structural strength to resist horizontal loading.

Be the first to review “LinenmoireCase” Click here to cancel reply.