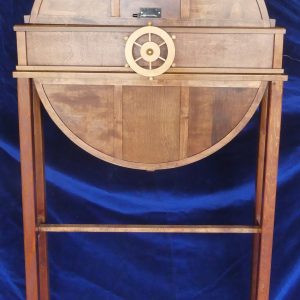 The cards are better than 90 years old, not the cabinet….

A project two years in the gestation, and six weeks in the creation.

It all started when my sister – the keeper of the family artifacts – sent me 19 Valentines. From the 1920’s, my mother’s when she would have about seven years old.

They wanted to be seen, but how best to array them?

Sure, you could BLAP stick them into a picture frame. Done. Yawn.

This was not only too boring to contemplate, but the cards would not be easily accessible for complete grokking; just like all those museum specimens: Look But Don’t TOUCH!

The two-year-ago concept had a sort of miniature Ferris Wheel with each card in its own car.

But I discovered that I then did not know how to build a wheel.

That deficiency has since been remedied.

Fine, we put the cards around the periphery of a wheel, like a roulette wheel, about 3 feet in diameter.

The easy answer would have been just to mount the wheel on an axle, fasten that axle to a board and slam the whole thing onto the wall. Done. Yawn.

This enterprise wanted enclosure, to both protect the cards, and to make the viewing of each a conscious act of selection – you have spin the wheel to get the deal.

The cards are removable – lammed on the wheel with magnets – and the door opens so that you can spin the wheel, make a deal, and take out a card for nostalgic viewing.

Aesthetic Challenge: how to form an enclosure that would not look like a cheap packing crate.

This took some slacking until the Final Answer bubbled up/leaked out of the subconscious, which it does here at JohnsonArts with astonishing and satisfying regularity: The cabinet Must Be Circular.

Once this die was cast, all the rest was simply (but not simple) follow-through.