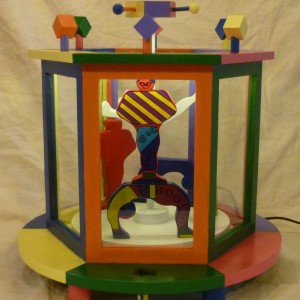 The Hoopla Troupe was the creation of a talented young writer, Thea Wheelwright, in the 1920’s. They were designed, hand formed and painted to go along with a set of children’s stories Thea had created about a young boy and girl who have adventures behind the moon and under the sea.

Her son presented me contemporary copies of the original seven figures, which can be arrayed in any number of configurations stacked atop each other, and they immediately called out for a proper and fitting stage on which to conduct their acrobatics.

The Hoopladrome is the result.

Six sided (perhaps I should have made it a seven-sided case, but 25.71 degree angles are rather more challenging than the 30 degree angles on each meet face of the six faces) with glass on each side and a hinged door in back – I was looking for a harlequin effect.

Lit from within, as any performance arena ought to be, with LED’s.

The One-Ring Circus spins when actuated by the capstan atop.

The figures are removable for play.

Be the first to review “The Hoopladrome” Click here to cancel reply.