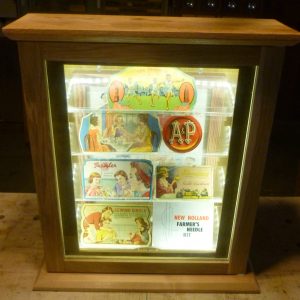 They don’t pack ‘em like they used to. Sure, you can still buy packs of sewing needles, but I’m guessing that the wallet in which they come is less interesting than these.

These come to me from my sister – keeper of the family artifacts – some secret cave hidden in the back hollows of the Pennslobovian headwaters of the Sinnemahoning Creek.

Judging from the apparel, these date from the 1920’s and 1930’s – Note the top wallet featuring Olympians. The 1932 Summer Games were held in Los Angeles.

There were two departures from cabinets I have made before. 1 – a front baffle or screen around the periphery of the inside of the case to prevent seeing the internal LED’s. This turned out to be a noble, but failed effort as the plexiglas shelves mirrored the LED’s. 2 – dowel as hinge. This was a mixed partial semi-not-altogether-failure as the dowel does indeed serve admirably as a hinge, but its employment unduly complicated the case assembly.

Otherwise, it is a plywood carcass with a beveled toupe and spats and a front door.

The sewing wallets rest on bent plexiglas. Behind these shelves hangs a double sided page from a period magazine. I used two sheets of plexi in the frame so that both sides could be seen, when the frame is reversed – didn’t want to lose either one of the sides by gluing one or the other to a placard.

I installed a cosmetic back to the case as I did not know where it would go – the rear might be visible.

Inquire within about displaying your vintage sewing needle wallets, or unvintage but sewn stuffed wallabys.